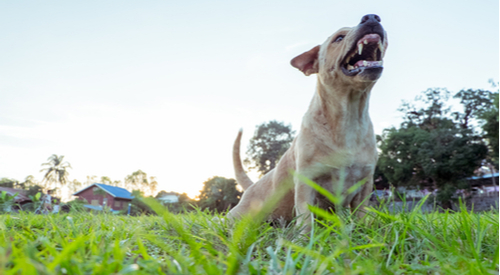 Dog Bite Injury Lawyer in Missouri and Illinois. Dogs can be treasured members of the family, close companions, and a friend even when times are tough and no one else is there for you. However, every so often man's best friend is not very friendly, and the natural animal instincts of dogs can take over. If that ever happens to you or someone you know, a top St. Louis dog bite injury lawyer can be your best friend.

Attorney Gene Hou at the Missouri Injury Law Firm is an experienced St. Louis personal injury lawyer who puts his clients first in everything he does. He has a long record of representing his dog bite injury clients with compassion as well as vigor. If you have been recently bit by a dog, suffered injuries, and are looking to recover damages against that dog's owner, call our firm at 636-333-1717, or fill out our online contact form.

What Should I Do After I've Been Bit By A Dog?

If you have recently been bit by a dog, you're probably in a state of shock and confused about what to do next, just like if you were in any other kind of accident. And just like any other accident, there's a number of steps you should immediately take after it has happened. We suggest you do the following if you've recently suffered a dog bite injury:

Since the year 2009, Missouri and Illinois have both operated under the same legal principle regarding dog bites. Prior to 2009, dog bite law in Missouri operated under what is commonly called the "one bite" rule. What this meant was that dog owners could not be held liable if their dog had not previously bitten another human being--thus giving Missouri dog owners a free bite before they could be sued for negligence.

However, in 2009 Missouri Revised Statute 237.036 came into force, which completely changed how Missouri law viewed dog bites. No longer could dog owners get a free pass for the first time their pet bit a human being. Instead, Missouri joined Illinois and 29 other states (plus the District of Columbia) in adopting the strict liability standard for dog bite injuries.

Under strict liability, dog owners are now responsible for the actions of their pets at all times. If a dog bites someone, without provocation, on either public property or private property they are lawfully on, their owner can be sued for any and all damages. In addition, Missouri law requires dog owners to pay a fine to the state of no more than $1,000, in addition to any civil damages they pay out. Illinois' law regarding dog bites is called the Animal Control Act, or 510 Illinois Compiled Statutes 5/. It is much more far-reaching than Missouri's dog bite law as it also includes guidelines about what happens to dogs after they bite another human, which in Missouri is delegated to county or city-level authorities. Most importantly, it does mention that dog owners in Illinois are "liable in civil damages to such person [that their dog bit] for the full amount of injury caused".

What Happens To A Dog That's Bit Someone?

Both Missouri and Illinois have largely the same procedures they follow after a dog bites a human being. The only difference is that Illinois' dog bite procedures are part of the state Animal Control Act, while Missouri's procedures are determined by each county or city. While this allows for some variation in other matters relating to dogs (for example, some cities in Missouri explicitly ban certain dog breeds like pit bulls), for the most part the protocol following a dog bite is identical.

Following the report of a dog bite, local animal control will impound the dog for ten days. The dog will be taken to a central facility such as an animal shelter or a veterinarian's office. They will then be observed for that time and checked for diseases, most notably rabies. Before they are allowed to leave the facility, a tracking microchip is implanted in the dog, and if their owner has not done so already the pet is spayed or neutered. If authorities have deemed the dog to be safe, they can be released back into the care of their owner, but not before they pay for all costs related to the care and feeding of the dog during its time under observation.

Once a dog is back in the custody of its owner, it is also placed into a statewide database of "dangerous" (in Missouri) or "vicious" (in Illinois) dogs. Owners of dogs placed in these categories must keep them in secure pens or kennels, and when out in public must be kept on a short leash and muzzled. If a dangerous or vicious dog bites someone again, they are once again placed under observation. However, this time owners must file an appeal and prove that they can maintain safe custody of their pet: otherwise, it will be euthanized.

How Much Can I Get For My Dog Bite Lawsuit?

Dog bite injuries can vary in their severity, but one thing is for certain: they are no joke. Dogs have strong jaws (a study found that on average, a dog's bite exerts 320 psi of force, more than double a human's bite) and sharp teeth, both legacies of their predator ancestors. While, for instance, being bit by a shih tzu will not cause as many injuries as being bit by a Doberman Pinscher, the most common injuries our dog bite lawyer sees include:

A skilled dog bite injury lawyer can help you recover damages for all of these medical expenses and more. In addition to standard hospital or doctor's bills, you can get money for any prescription drugs, required rehab or physical therapy, and any mental health counseling needed. If the dog that bit you also damaged your property--for instance, if you were bit while riding a bike and the dog also broke part of your frame--you can get money to replace that, as well as damages for the pain and suffering the ordeal of being bit by a dog caused you.

Studies have shown that the vast majority of dog bite lawsuits never go to trial. Insurance companies do not want to run the risk of having to potentially pay a large jury award, while plaintiffs like settlements as they avoid lengthy court cases and get them money in their pockets as soon as possible. Data from the Insurance Information Institute found that the average dog bite lawsuit settlement in Missouri is about $47,400, while the average settlement in Illinois is slightly higher at $48,100.

Contact A Dog Bite Lawyer Who Fights For His Clients

Attorney Gene Hou knows that getting bit by a dog is an experience no one should have to go through. He takes the time to get to know all of his clients and ensure that they don't have to go through the legal process alone. In addition, he brings a unique combination of legal experience both in private practice and as a staff attorney for a major insurance company into the courtroom, which means that he knows how insurance companies operate and thus can fight for your maximum compensation.

If you or someone you know has recently been bit by a dog, do not hesitate to contact an experienced dog bite injury lawyer. Call Gene today at 636-333-1717 or fill out his online contact form to set up a free, no-risk case evaluation.

Ready for your FREE case review and initial consultation?

We have years of experience and proven success at trial.

From the start, our firm is committed to you and your case.

We are dedicated professionals ready to fight on your behalf.

From speeding tickets to devastating car accidents to serious injury and death cases, Missouri Injury Law Firm has the proven expertise to handle your case and provide you with step-by-step legal assistance. Missouri Injury Law Firm provides a highly experienced personal injury attorney to clients who have been injured in an accident whether at work or as a result of someone else's negligence. Our traffic law attorney provides representation for traffic accidents, speeding tickets, and DWI/DUI cases and is committed to every client, regardless of the circumstances. To strengthen your case in court with high-quality legal representation and to receive the maximum compensation for your injury, choose Missouri Injury Law Firm.

Website Design and Website Optimization by Web Design and Company
Injury Law Firm
Testimonials 5 stars - based on 5 reviews
From speeding tickets to devastating car accidents to serious injury and death cases, Missouri Injury Law Firm has the proven expertise to handle your case and provide you with step-by-step legal assistance. Missouri Injury Law Firm provides a highly experienced personal injury attorney to clients who have been injured in an accident whether at work or as a result of someone else's negligence.